The Simple Way To EQ a Microphone or Instrument 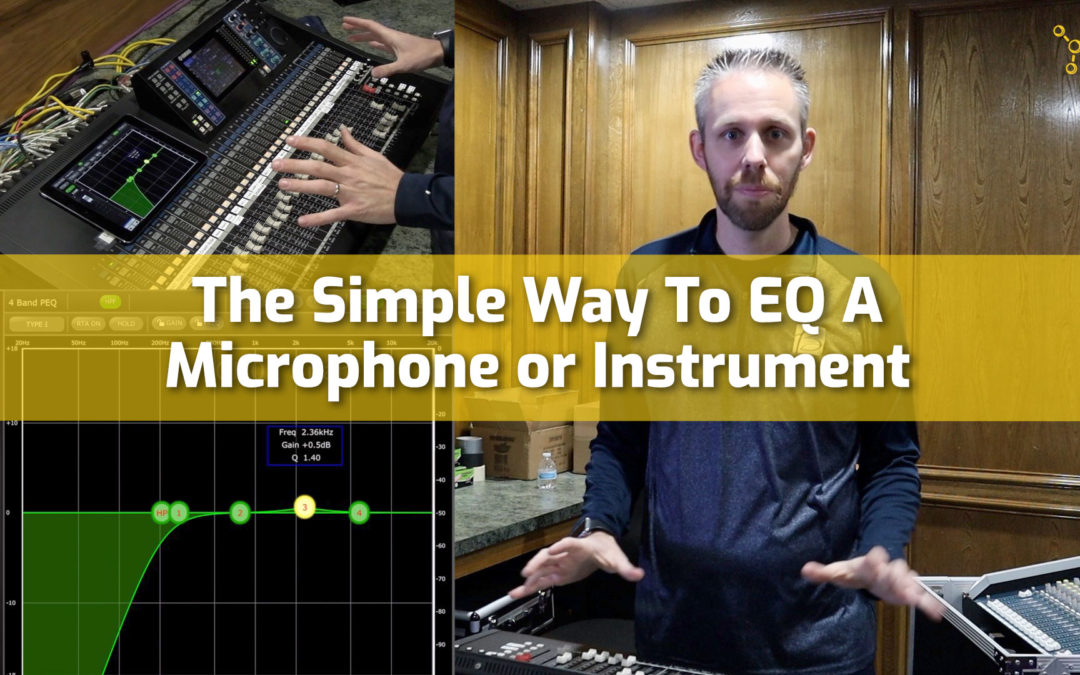 EQ may seem overwhelming, but it’s not as hard as you think once you understand a few basic concepts.

This video will walk through the simple way to EQ a mic or instrument on both a digital and analog console.

Hey everybody. So this past week has been a pretty busy week and I didn’t have the time that I wanted to record a full video. So instead, I’m gonna show you a video that I recorded about six months ago for another organization that I’m a part of. And this video is all about EQ – how to EQ a microphone or an instrument.

EQ is really not that complicated when you understand a few basic things. And here’s the big take away for EQ: It’s called “sweep and destroy,” just watch this video and you’ll find out what I’m talking about.

But I hope you like this video, subscribe to this channel, and I’d love to connect with you over at WorshipResources.church, where we help you discover and learn how to use quality resources to make your church better. My name’s Joshua, and if I can serve you in any way, send me an email [email protected] Okay, here’s how to EQ, I hope you enjoy.

Yeah, so today we’re gonna talk about EQ. I’m gonna walk you through how you can EQ a microphone or an instrument, and it may seem overwhelming, it seems like there’s no way you can learn it, but it’s really not that complicated if you know just a few little tips.

So I’m here in front of a digital console, and most digital consoles have an option where you can control it with an iPad or a device, so that’s what I have here. And where this is helpful is, digital consoles will give you a Graphic EQ, which basically means you can see on the spectrum the range of notes and frequencies. So I’m just gonna make this EQ flat, first of all. And a flat EQ means that you’re not adjusting, taking out or adding any frequencies. It’s just whatever is coming through the microphone, that’s what is gonna be heard in the speakers.

In a graphic EQ like this, the right side are the high frequencies, and this one goes up to 20K, and the left side are the low frequencies, so this goes down to 20 hertz. And you can see I, actually I’m gonna take that off. So now I have a totally flat EQ right here.

So I added… So you can see the green here is taking out this range, so I added the High-Pass filter and I’m taking out that from the sound.

This will help tremendously with vocal mics because most vocals do not go anywhere near the 200 hertz or 20 hertz level. You just can’t sing that low, and so there’s no reason for that to even pass through. What it does is cleans up the audio.

So the first thing is to add that high pass filter, and the second thing, and this is the tip that everybody needs to know, and it’s called… It’s an EQ technique called “sweep and destroy.”

And while they’re singing, you’re listening for what sounds bad, and when you hear something that’s annoying or it’s harsh or it hurts your ears, then take and just cut that portion out. And you can do that, this one has four bands, so I can do it multiple times.

So I found… So maybe it was 2K and I took that 2K out. Then you can do it again. You can sweep through the spectrum and find the sound that is bad, and then just cut it out until it sounds good.

So again, I’m gonna start again flat, and again, this is on a digital console. I’m gonna show in a minute on the analog side how it works, so this fourth, the fourth band is designed for the high frequency. So if you’re hearing a high pitch or a high squeal and I’m talking really high piercing ear piercing. If you have feedback like that, oftentimes it’s gonna be in the 50 to 20 range, so you can boost it just temporarily while the instruments playing, a while the person singing, and then listen for it and then just cut it out at 1K to 5K range.

That’s where the clarity of your vocal is gonna come from, and so you have… If it’s muddy and it’s hard to understand, or it feels kind of boxy, that usually is in the 200 hertz to 500 hertz range. So you can, again, you can just boost it and sweep through until it sounds bad, and then just take it out of the frequency.

Okay, so you can do that, say two or three times and just do it till it sounds good. If it sounds good to you, then do it. And move on.

Now, a couple of things about EQ. Most of the time you’re gonna cut EQ, cut from the sound, you’re not gonna add to. So very rarely, in fact, never should you see an EQ like that, because what you’re doing is you’re adding to the frequency and it just gets really messy, and it can get really loud and a potential for feedback. Instead you wanna cut the sound out of the frequencies that are not sounding good to you.

Another tip is that every vocalist in every instrument will be a different EQ.

Now, you can get started with the same basic EQ, but everybody’s gonna sound differently depending on the timber of their voice, depending on if they’re male or female, depending on if they’re playing acoustic guitar, or bass guitar or piano. Everything is gonna sound differently and they need their own specific EQ. And so you should go through each channel separately, individually, one at a time, ask them to play or sing, and then just go through… Use the sweep and destroy method, and that will help you clean up your sound tremendously.

Okay, so I’m gonna show you the same process, but on an analog console. So this is an analog console, it’s not digital, analog consoles have EQ’s through these little knobs. And depending on your console, it might have three bands of EQ or it could have six. And it could also have what’s called a sweeper. So on this console, the blue are my EQ bands. So I have four EQ bands, and the top one is the highs – whereas on the graphic EQ, the right side is the highs. On this one, the top is the highs and the bottom one is the low, and then you have low-mid and high-mid. And the green on this one are the frequency sweepers. So basically I can choose which frequency within that range is added or taken away.

Okay, so what I recommend is start flat, like we did on the graphic EQ. Just start with them all straight up at 12 o’clock and that’s flat. And then have the person sing or the instrument play, and then you’re gonna listen for what sounds bad. You’re gonna listen, does it hurt your ears? Is it squealy or squechy, is it to boomy, or is it too low-end? And then you’re just gonna cut the portions that sound bad. So start with the highs, and you can boost the highs a little bit.

The second section of EQ, you can see, I hope you can see it, but they’re actually grouped together. So this green knob is grouped with the blue knob. So the green knob is the sweeper. So remember the sweep and destroy method? So what you can do is you can boost the gain on the EQ and then start with it on the far left, and you’re gonna sweep through the frequency spectrum. So right now I’m starting at 500 hertz and I’m gonna sweep through and I’m listening for when it sounds bad. I’m just listening while they’re singing, while they’re playing, and when I find the place that it sounds bad, then I’m just gonna turn that frequency down. I’ll do the same thing with the low-mid.

So the low mid-frequency is 35 hertz up to 1K, that’s what this frequency spectrum is going to adjust. So I’m gonna turn the gain up first on the frequency, I’m gonna start on the left and sweep through. I’m just gonna slowly sweep through and listen until it sounds bad. Listen, listen, and sometimes with an audio console, you have to pick and choose. Like you might find two places that sound bad, just choose the worst one. Find the worst one, and then turn it down. And then you can take your low if you need more low-end if you want it to be a little more boomy, you can boost the low or if you need to take the low end out, you can take the low end out.

So that’s how you do this – EQ on an analog consult.

Hey, thanks everybody for watching this video. I hope this was really helpful to you, and if you have any questions about EQ or sound, or lighting or video, anything production-related for worship ministry – let me know. You can put it in the comments or send me an email. Connect me on social media. I’d love to connect with you and answer any questions or help you in any way that I can. Thanks again for watching.

If you haven’t yet, go ahead and click that like button right before this video ends or subscribe to this channel, and we’ll see back here next week!